Finding cheap vintage clothes is part of the attraction of building your collection. Making your search a mixture of online investigation, visits to shops, journeys out of your local area, and trips to festivals and pop-up markets is part of the attraction. It’s these journeys and events that result in meeting new people and making new friends. In this post we’ll be looking at some of the things to look out for while you search.

Where to find cheap vintage clothing

Even though vintage clothing is, generally speaking, second hand, this doesn’t mean it comes cheap. The exquisite cuts, lavish fabrics and intricate detailing associated with the best vintage clothing – not to mention its rarity – means the most sought after pieces often come with a hefty price tag. But there are ways of picking up cheap vintage clothing if you know where to look.

Keep It in the Family

There are all kinds of treasures lurking in attics and old wardrobes up and down the country and they should be everybody’s first port of call in the search for cheap vintage clothes. If your grandmother was in her social heyday in the 1950s or 1960s then she might have some of her old dresses or coats stored away for posterity. Ask your aunt if she kept any of her old party frocks, or just have a family get-together-cum-clothes swap shop, open a bottle of wine and listen to tales of what it was really like to live through the 1980s.

Charity and second hand shops are a great place to pick up cheap vintage clothing and do something worthwhile at the same time. Do some research before you go and have an idea of the things you might be looking for. Also, be strategic: search out charity shops in areas that are off the beaten fashion track, or where there’s an older population. This increases your chances of nabbing some vintage gems out of sight of the competition.

Nearly every city and major town has a market selling second hand clothes, and whether it’s a daily, weekly or pop up market, it’s most likely one of the best places to find cheap vintage clothing. Keep an eye on notice boards or in the local paper for notifications of upcoming sales. If you live in the city, do some online research to find out where and when markets selling vintage clothes take place. Look out also for warehouse junk shops specialising in vintage clothes, as these will often be cheaper than smaller neighbourhood vintage boutiques.

With the revival of all things retro and the upsurge in interest in handicrafts, textiles and that quaint little pastime of knitting, it is no wonder that vintage jumpers are big news. Knitwear is something to be loved, cherished, indulged in … and vintage knitwear is even better.

Knitting was originally performed solely by men, with the first guild set up in Paris in 1527. Knitting machines invented in the 19th century became commonplace by the early 20th century, though early types were in use before this. Hand knitting became a popular leisure activity, though during the First World War it became more of an occupation, with women knitting gloves, socks, scarves and jumpers to send to soldiers.

In the 1920’s, alongside flapper dresses, Jazz and gin came a renewed interest in knitwear as fashionable items. Jumpers, dresses, jersey suits and even bathing costumes are typical vintage knitwear pieces of the period, with designers such as Gabrielle “Coco” Chanel and Madeleine Vionnet amongst the big names to promote the trend for all things knitted. Chanel famously designed the striped wool swimsuits for the ballet production Le Train Bleu. Madeleine Vionnet designed affordable, comfortable and stylish knitwear for women to wear everyday.

The 1930’s saw knitting patterns start to become more detailed, with narrow waists, shaped busts and delicately shaped necklines prominent features. Sweaters were popular both as casual and evening wear. However wool became rationed in the 1940’s and the restrictions meant that short sleeved jumpers and footlets became common.

Commercialisation in the 1950’s meant that knitwear became cheap and accessible, with ready to wear garments appearing on the shelves. Nylon fibres were introduced during this period. Large, oversized sweaters and high polo necks were both popular styles.

There was not as much interest in knitwear in the 1960’s, though it picked up in the later years of the decade. In 1969 Knitting Vogue featured an ethnically inspired Moroccan waistcoat designed by Kaffe Fasset which became popular.

The 1970’s saw a true revival of knitting, and alongside the bohemian, natural themes of the time natural, organic fibres were the materials of choice. Sweaters with kimono sleeves were typical 1970’s, and vintage jumpers from this period display bold patterns and colours. The designer Zandra Rhoades created a bat wing sleeved sweater in vibrant stripes of pink, green and blue.

With the 1980’s came an influx of novelty yarns, some previously unavailable, from glittering gold and silver to fluffy, chunky yarns and tweed, mohair and cashmere. Knitwear would never be the same again.

Party like it’s 1899! There are many things you can say about the Victorians, good and bad, true and false (the thing about covering piano legs in case they incited feelings of lust is an urban myth, by the way), but they certainly knew how to dress.

Whether your style is steampunk, gothic or something altogether more individual, including nineteenth century elements in your wardrobe can give an interesting twist to what you wear every day, or provide truly jaw-dropping outfits for special occasions.

Shoes and boots are one subtle option. The era’s distinctive long lines, lacing, buttons, and elegantly curved heels go beautifully with many kinds of clothes, and will not make you look as though you’re on the way to a fancy dress party.

Similarly, jewellery inspired by the nineteenth century: chokers, pocket watches, brooches, necklaces, earrings or bracelets, can allow you to add a subtle hint of the era without going overboard.

A third way to give a hint of Victorian clothing without actually wearing historical costume is by going for more up-to-date styles with features that recall the era. For example, a ruffled shirt or skirt, a corset, or a top that has some corset-like features, such as lacing or boning, or a high-necked blouse. Puffy sleeves are a particular favourite of mine.

However, reproduction Victorian clothes can also be a great choice, particularly for those with a bolder personal style. Waistcoats, bustle skirts, puffy-shouldered blouses, worn either with one another or mixed with non-retro items, or even items recalling another period in history.

Victorian style coats and jackets are fashionable at the moment, and as a long time devotee of nineteenth century style, I’ve been stocking up. Look out for items labelled as ‘military style’. Although this kind of style is most common in the winter, with heavy wool being the most popular fabric, there are some lighter jackets available, suitable for spring, autumn or even summer.

The Victorians wore their corsets underneath, of course, and modern fans of Victorian clothing have the choice to follow suit, and enhance their hourglass figure under their outer clothes, or to wear the corset on the outside, as a main feature in itself. If you want a corset that pulls your waist in a significant amount, then choose one with steel bones. Cheaper ‘fashion’ corsets with plastic bones will smooth your own figure, but they won’t change your waist measurement.

Victorian clothes work for women (and men) of all shapes and sizes, and can suit a wide variety of different tastes and personal styles.

In contrast to nearly all other items in your wardrobe, the swimsuit is a relatively modern invention.

The Victorians were the first to make outdoor bathing fashionable. Railways made it easy to travel to the coast, and there was a new-found passion for the outdoors. The result was the greatest of all Victorian inventions, the seaside.

When Victorian ladies bathed, they wore full-length dresses. These had weighted hems, to stop them from floating to the surface. The men wore full-length bathing suits, which looked more like underwear.

There aren’t many who’d want to return to those Victorian styles, and we’re not all happy to wear a modern micro-bikini either. But, between then and now, there was a Golden Age of vintage swimwear. Somewhere around the mid-1900s, they seemed to get it about right.

The swimsuits of the 30s were the first to look anything like their modern counterparts. And, from the 40s onwards, things began to change rapidly. The bikini made its debut in 1947. Tanning was now fashionable, swimsuits were getting smaller, and traditional one-piece designs followed the trend. Ladies were starting to show more skin.

Also in the 40s, there was another important factor. Corsetry was a declining industry, and corset manufacturers moved into the swimsuit market. When we think about vintage swimwear, we probably visualise one of their expertly constructed garments, engineered to hold a lady’s figure in perfect shape. It’s an image that conjures up thoughts of British holiday camps, beaches on the Riviera, and Hollywood stars.

By the mid-60s, nylon and Lycra had become the preferred fabrics for swimsuit designers. The big difference was that these materials would stretch. The overall look was smoother, and garments were more comfortable. They were also easier to produce, and cheaper to buy. Women could afford a new swimsuit for every holiday. And, from the 60s to the modern day, swimsuit fashions changed more rapidly than ever.

Some would argue that the Golden Age ended around 1970. There have been some interesting developments since that time, one example being the tan-through swimsuit. But, for innocence and fun, nothing quite matches the vintage swimsuits of the 40s, 50s and 60s.

Today, you can buy styles inspired by that era, and recapture the Golden Age of swimwear yourself. Two-piece and one-piece vintage swimsuits are available, in retro styles from the 40s onwards. The fabrics are modern, but the spirit is authentic. 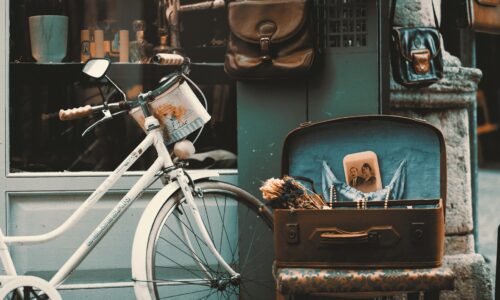 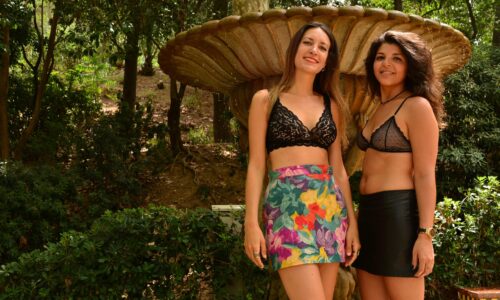