The Goodwood Revival dress code is entirely voluntary but strongly encouraged as it helps to create the atmosphere that makes the event so popular. The Revival is an annual motorsport event that takes place every September at the Goodwood Airfield circuit, just outside Chichester, West Sussex, in the United Kingdom.

Classic cars and bikes from the golden age of motor racing take part in races on the Goodwood Circuit that was built on the perimeter of what was RAF Westhampnett during World War II.

Billed as a ‘magical step back in time, this annual event celebrates motoring heritage and culture from the 1930s to 1960s. As well as the vintage cars and aircraft on display, there’s live music, drink, period actors and actresses within the crows, and plenty of good food.

The event is a three-day festival, and attendees are encouraged to dress up in vintage clothing or fancy dress from one of the decades.

However, despite the impression given by the publicity photos, there is no strict dress code for the event, and those who do not adhere to it are not turned away. Vintage outfits and fancy dress are encouraged but they are not mandatory.

Planning for the event is essential. If you want to achieve a classic look and a vintage feel, or perhaps enter the best dressed competition, then you may need to sort out your wardrobe well in advance. Start scouring the local or online stockists for those two tone brogues, a gray flannel suit, or a range of double breasted jackets.

Ladies, you may wish to find items from the 1950s, the golden era of vintage fashion, or go for some animal print, or the Sixties Chick look (think Bridget Bardot, Audrey Hepburn, Julie Christie, Sophia Loren etc).

When it comes to vintage outfits for men from the 1940s, there are a few key things to keep in mind. The first is that the cuts of the clothes were much more masculine than they are today.

This means that there is a lot of emphasis on shoulders and chest, and clothing is often boxy or baggy. The colors and patterns of 1940s also tended to be much bolder than what we see today. Stripes, checks, and plaids were all popular, as were earth tones such as green, brown, and tan.

The 1950s were a time of great change in terms of fashion. After the austerity of the 1940s, people began to enjoy life more and express themselves through their clothing. This led to a more colorful and flamboyant style, which is still evident in attire from the era.

For men, the 1950s was all about being well-dressed and looking sharp. Clothing was slim-fitting and often featured bold patterns or colors. Suits were popular, as were fedoras and other hats. Ties were also an important part of men’s fashion in the 1950s, and a good selection of ties in different colors and patterns is essential for any vintage wardrobe. How about a tweed blazer with a kerchief in your breast pocket?

When it comes to vintage attire for women from the 1940s, the cut of was much more feminine than today. This means that there is a lot of emphasis on curves and waistlines, and clothing is often tight or form-fitting. The colors and patterns of 1940s vintage clothes also tended to be much bolder than what we see today. Stripes, checks, and plaids were all popular, as were earth tones such as green, brown, and tan.

In the 1950s, women’s fashion was all about looking classy and elegant. Clothing was often very feminine and figure-hugging, with lots of emphasis on the waist. Colors were more subdued than in the 1940s, with popular shades being black, white, beige, and navy blue.

If you’re looking to dress up in vintage style for the Goodwood Revival event, it’s important to keep these things in mind. However, there is no dress code for the event, so you don’t necessarily need to use this information! The good news is that there are no restrictions on how much of your outfit needs to be vintage. If you want to wear a modern shirt with a vintage skirt, go for it! Just make sure that you have fun with your look and feel confident.

Military uniforms are always a popular choice for vintage outfits at the Goodwood Revival. They are instantly recognizable and can help you to stand out from the crowd. There are a few things to keep in mind when choosing a military uniform to wear to Goodwood.

The most important is to make sure that the uniform is period-correct. This means that it should be from the same era as the Goodwood Revival itself (which is usually the 1940s or 1950s). You may also want to consider wearing a specific country’s military uniform, or even a specific regiment. If you’re not sure which uniform to wear, there are plenty of resources online that can help you make the right decision.

Expect to see men and women uniforms of the RAF, Royal Navy, British Army, US Army, and the land girls of the Land Army. You’ll also spot a few inviduals in the uniforms of both German and Soviet armies.

These thick uniforms can get hot if the event is warm but if the weather turns (it can easily on this section of the Goodwood Estate in September) then they are the ones who will remain snug and dry.

The mods and rockers clothing look is one of the most iconic styles from the 1960s. Mod clothing is all about looking neat and polished, while rockers’ clothing is more casual and rebel-inspired.

Mods often wore suits or smartly tailored clothing, with bright colors and patterns. They favored clean lines and geometric shapes, and accessories such as hats, scarves, and ties were important styling elements. Rockers, on the other hand, favored denim jeans and jackets, T-shirts, and leather jackets. Their look was more grungy and relaxed, with a focus on being comfortable rather than polished.

The mods and rockers looks are still popular today, so it’s easy to find pieces that will work for a good Goodwood Revival outfit.

Rockabilly clothing is all about looking sexy and flirty. It borrows inspiration from both rock and roll and hillbilly styles, hence the name “rockabilly”. The key features of rockabilly style are tight-fitting clothing, bright colors, and lots of patterns. Rockabilly clothing is a style that combines elements of rock and roll, country, and blues. The look was popularized in the 1950s by musicians such as Elvis Presley and Johnny Cash.

If you’re looking to create a rockabilly outfit for the Goodwood Revival, there are a few things to keep in mind. Firstly, the clothes should be made of natural fibers like cotton or wool, as synthetic fabrics were not common in the 1950s. Secondly, the clothes should be well-tailored and fitted. Finally, accessories are important – think about wearing a cowboy hat or bandana.

If you want to dress up in rockabilly style for the Goodwood Revival event, there are a few things to keep in mind. The first is that the cuts of the clothes should be very tight-fitting. This means that you can show off your curves in a sexy way.

Bright colors and patterns are also essential, so go for something that makes you stand out from the crowd. Finally, don’t forget to accessorize! A good Goodwood Revival outfit should be well-planned in every aspect.

The costumes worn in the film Grease are a good example of what was popular during the 1950s. John Travolta and Olivia Newton-John both wore clothes that were stylish and trendy at the time. For men, Travolta wore a leather jacket, white shirt, and black pants. Newton-John wore a flared skirt, blouse, and cardigan. Both actors looked good and were perfectly styled for the era.

In the 1960s, as well as being a time of great social change, fashion took off as people tried to express their individuality through what they wore. This led to a huge range of styles and fashions from that time as the decade progressed, from mod and Beatles look of the early 1960s to the hippie clothing of the Summer of Love (1967) and the psychedelia that erupted towards the end of the decade bringing in an abudance of bright colours.

Although some good clothes were made in the 1970s, many of them were made of synthetic fabrics and featured baggy silhouettes. This looked good on disco dancers at discotheques, but not so good at an event like Goodwood Revival!

Instead, stick to natural fibers like cotton and wool for good vintage clothes from this decade. Try wearing flared trousers or bell-bottom jeans, baggy checked or striped shirts, slim-fitting polo shirts, corduroy shorts or slacks, beige suede shoes with a good grip, and slip-on loafers. A good 1970s vintage outfit is good for the Revival!

Since all things vintage become popular 10-15 years ago a whole mini industry has emerged to meet the demands of the market. Charity shops (thrift stores) are still good places to hunt down items. You may not find the full suit but individual items and accessories still appear in them.

There are vintage shops in most major cities and some of the larger towns within the UK. One with one of the biggest selection both online and in store is Rokit. Use the code ROKIT15 and this link to secure a 15% discount!

Step back in time and opt for quality and glamour, and don’t forget your hair (as if you would!), shoes, and accessories. Go as your favourite pinup from the era or at least use her as the inspiration.

For men, a well chosen jacket or suit with the right hair style is all it takes to enter the best dressed competition.

Look out for some famous faces in the crowds, not just among the racing drivers and their entourages but also among those enjoying the hospitality packages.

At the event itself, the large Goodwood Revival market is packed with stalls stocking vintage fashion that will give you plenty of scope for adding to your collection. 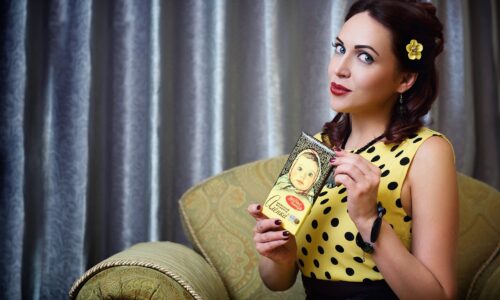 Vintage Festivals – All the rage these days